This post is being made because many years ago myself and most of my LJ friends migrated to Facebook and recently our trust in Facebook has been betrayed by their punitive expedition to censor any Conservative Republican post with which they did not agree. Therefore I am migrating back to LJ and good riddance to Facebook! The process of migration will be contingent on the rapidity of exodus by my conservative friends and the addition of new friends made on Facebook. God bless you and welcome! (back) ! 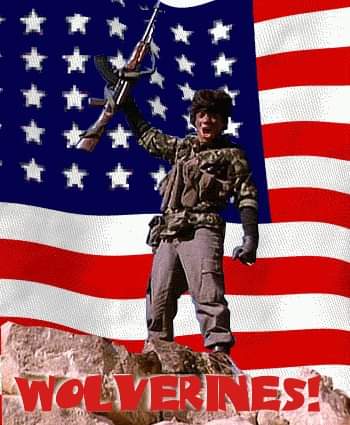 Thats right, OXOjamm Was Number *1* in the world music Genre For over 3 years and Is still in the Top 40! Our Average is #1 Over-all and With every song reaching the Top 10 at least once, with over 3/4 of our songs reaching #1 at least one time!

(UPDATE) All Shows Sold Out until 2016 EXCEPT our OPEN Jamm Shows which are FIRST ON SITE first in! Email for Location and time.

All Daytona Shows require security clearance or your ticket will be worthless! If you do not complete and return your security clearance paperwork you will not be admitted and your ticket is NON TRANSFERABLE! This is not us doing this..... This is the Sponsor and the rules they set in order to protect the VIP'S in attendance. Dont Bitch about it! Just send the freakin paperwork in and get your clearance! If your clearance is disapproved, you will be given a full refund. (Just make sure you dont have any outstanding warrants, K?)

Some of these Shows have my Backup Drummer (Jack Holiday) performing for me and because of this, I cant even get in my own show unless he cant make it and I have to wind up doing it anyway...Bottom Line: These are serious people and they make you dot your I's and cross your T's and you cant snow them. If we try any funny business then we will loose this gig. So dont feel bad, this is this and it aint nothing else, K?

Until Mp3.Com.Au starts Hosting Music Again, Learn German For Free! Select a date by clicking the Link Below and begin! Auf Wiedersehen!

Note to Friends and Family: These Shows have VIP's at them and that is the reason for the Security Clearance. Thats right, things have changed. The only performers that are allowed in are the ones that are performing....No "Helpers" no friends and no Family.

Come to our open Jamm Sessions! No Tickets to buy, no security clearance and no dress code! (of course you cant be nekked.....(^>)

"Hell you say! YOU Never fell in Love with a 89 Pound Midget! Why it was, let me see...right after we rustled them steers on BICYCLES in Hoboken New Jersey!...Yep!

(Course they dont normaly do it that way but "Glass-Eye" Wang...well, thats all he had was them old bicycles and well, I had to fight off a HEARD O' SAVAGE HOUND DAWGZ nippin and a clawing at me!.. but I put on my WARFACE and just walked right through um!....Well, Sort of...)

An after we Sold the steers (and tha bicycles) we split up the money.... an Grady McStevens (That no-Good-Son-of-A-Whore) thought he'd get tha drop on me! BUT I OUT DREW HIM and blew his big toe off!!! (an there he was for 3 days a-lookin for that toe...you can ask anybody).......

And when I had thrown all the FRENCH Sailors outta tha place and was gettin fixed ta throw myself out ...there she was..a-sittin on tha piano....Pretty as a picture (with an iron claw where her right hand should have been) and next thing I knew I was wakin up in bed with a smile on my face.....

I had a dream the other night and it is a rather powerfull one. I feel compelled to share it with you:

The world was on the verge of a third world war. I was in a desert canyon with the two opposing factions on each side. I climbed up (rather easily) to the top of a plateu and found it crowded with people, mostly Native Americans and they were discussing things amongst themselves.

I continued walking and in a wheelchair sat an old Veteran. He motioned for me to come over and showed me a picture of what I needed to stop the 3rd World War. It was a toilet seat made of Ivory and into it was carved hirogliphics that if decoded held the Key to what I needed. (What would Freud make of that?)

He then took me through the vally where he showed me some huge bolders and I said to him, "These look like plain old Boulders but inside they are pure Quartz crystal and hold the power of the Ages". It has been learned that Adolph Hitler's 1924 application to the Parson's School of Design (Back then, it was called the Chase School)*, was recently approved! "Welcome incoming freshman!" reads the acceptance letter sent to Hitler's original Bavarian PO Box. "Your years at Parson will be a most challenging and rewarding time and could help you to change the course of history!" The letter's final paragraph notes Hitler has been assigned to the "Yoni Shimelman dormitory."

Representatives from Parson's School of Design stumbled to explain how Hitler's application could have "fallen through the cracks" for most of a century. "The girls in the admissions office are young, bridge and tunnel types," offered one official. "They're all La Vida Loca, you know? Maybe they just didn't recognize the name.....?"

Hitler's drawing and painting skills were well-developed by the time of his application (see his portfolio piece above). Had he been exposed to exciting new cultures throughout europe during his service in the "List Regiment", during the First World War and givin the proper structure and training, it's widely assumed Hitler could have developed into a painter of renown. Instead, his application was lost and after what may have been seen by him as a "Final Rejection", Adolf Hitler then turned toward politics.

"Had we known this one application could have changed the course of history.....", said a Parson spokesman. "But these things happen. Stuff gets lost all the time. For instance, I'm always losing my apartment keys.

"Hey do me a favor," requested a Parson's board member. "If anyone finds out Osama's kids are applying to art school, somebody call and give us a head's up."

This makes you realize how important little oversights are in the great scheme of things. One can only imagine how this might have been seen as another rejection. How history would have been altered if he had arrived in the U.S. as just another art student, found acceptance and worked for an ad agency on Madison ave.

Surly, except for some fine Charles Rutenberg Home Advertisements (For which his style would have been beautifully suited), he would have passed this century virtually UN-noticed and the European war may have been fought against the Soviet Union instead.

I even think he would have progressed as an artist toward fine illustrations like this: In My view, this ties in with Cho Seung-Hui, his rejection and his personal Holocaust.

Vince,
OXOjamm.
* Named after American impressionist painter William Merritt Chase, who led a small group of Progressives who seceded from the Art Students League of New York in search of freer, more dramatic and individual expression. Sounds like our kind of school.

I got rid of this entry Because of recent events making it too personal for public view. The only person that I cared to read it has already done so and responded and so there is no need to have it here farther.

It was a pretty cool survay though...Ill miss it.

A God whose Heart refused to have Nothing but Sorrow for Man, would be poorer than Man.

"OXOjamm's auditions aint based on so-called "Talent" at all....No...it's based on character, which to me is way harder to come by. We can pump up the talent on anyone who has character...but if they just a poser, shit...to me their ass is worthless."